AGAINST THE ODDS TOUR: BLONDIE + SPECIAL GUEST THE DAMNED

AGAINST THE ODDS TOUR: BLONDIE + SPECIAL GUEST THE DAMNED

• We require proof of full COVID-19 vaccination.
• No negative tests allowed.
• IDs must be checked and correspond to the name given on the vax card.

See the infamous rock and roll legends Blondie and The Damned at Foxwoods Resorts Casino!


BLONDIE Undeniably one of the most trailblazing and influential bands of our time, Blondie is pioneering frontwoman/songwriter Debbie Harry, guitarist/conceptual mastermind Chris Stein and powerhouse drummer Clem Burke, along with now long-standing band members bassist Leigh Foxx, guitarist Tommy Kessler and keyboardist Matt Katz-Bohen. Among their hits is the groundbreaking rockdisco hybrid “Heart of Glass” the equally influential hip-hop fantasia “Rapture” the stalker-love song “One Way Or Another” and the lilting calypso “The Tide Is High.” It is a thrilling journey back to when Blondie pushed punk onto the dance floor and introduced a wider audience to hip-hop sounds, all the while building a catalogue of enduring hits along the way. For the last four decades, Blondie has become and still remains a true global icon; one whose influence both shaped and continues to inform the worlds of music, fashion and art. From an irreverent Lower East Side punk outfit to bona fide international ambassadors of New York cool, Blondie will forever be synonymous with that punk spirit that lives somewhere in all of us. Their chart-topping success, fearless spirit and rare longevity led to an induction into the Rock ‘N’ Roll Hall of Fame in 2006 and more than 40 million albums sold worldwide to date. As we look back at the band’s storied career, it makes Blondie’s current vibrancy that much more stunning after 40 years of entertaining all of us. And the band shows no signs of slowing down… following the release of their 11th studio album entitled Pollinator – which was selected as one of Rolling Stone Magazine’s 20 Best Pop Albums of 2017 – Blondie’s latest release, the BLONDIE: VIVIR EN LA HABANA soundtrack, comes from the short film capturing the band’s 2019 live debut performances in Havana, Cuba. The film achieved widespread recognition from the industry with a string of film festival premieres around the world, including its UK premiere at the Sheffield Doc/Fest and US premiere at the Tribeca Festival in June. Additionally, the first authorized Blondie Archive project in the band’s history — including extensive liner notes, complete discography and a historical photographic history hard cover books plus rare unreleased bonus material — will be released on August 26, 2022.

The Damned – the greatest surviving British punk band – are back with their first new album in a decade, still firing on all cylinders, and breaking all the rules. Where their peers either burnt out, or faded away into mediocrity, this most spiritually chaotic of all punk groups have never been away, never surrendered their ideals, always forged onwards. From 1977’s high-energy ‘Damned Damned Damned’, via the riotous ‘Machine Gun Etiquette’ (1979), to the macabre ‘Phantasmagoria’ (1985) and beyond, The Damned never stayed in one place for long. Colourful, anarchic, yet propelled by an indefatigable creative motor, they’ve expanded their remit with every phase, to become one of the top-flight UK groups of ANY pop era. Since 2008’s ‘So, Who’s Paranoid?’, they’ve toured constantly, to raise awareness of that amazing body of work. They now capitalise on all that with ‘Evil Spirits’, an eleventh studio album, which is not only fit to rank high amongst its illustrious predecessors, but also within the great rock pantheon. As their guitarist, Captain Sensible, points out, “I have some incredible albums at home, by The Kinks, The Who, The Small Faces – I want ours to be as good as those.” Far from merely trading on the shock value of bestriding the stage with just three chords and some lively egos, The Damned were always about proper music. Alongside The Sex Pistols and The Clash on the legendary ill-fated Anarchy tour in December ’76, they felt frustration rather than elation at being banned everywhere. Through ’77, they were courted by pre-punk giants who’d sniffed out their superior musicality, including Led Zeppelin’s Jimmy Page and Robert Plant, who checked them out at the Roxy, and Marc Bolan, whom they supported on his final tour with T-Rex. Flipping the bird at punk’s diktat that you shouldn’t consort with ‘dinosaurs’, The Damned even tried to lure Syd Barrett out of retirement to produce 1978’s ‘Music For Pleasure’.

Fast forward to 2017, and they’ve collaborated with another legend from pop’s golden age – Tony Visconti, whose production on innumerable classic albums by David Bowie, T-Rex and more, mark him not only as a master of his craft, but a perfect match for The Damned. Says singer Dave Vanian, “It was hearing Bowie’s ‘Blackstar’ that made me think about working with Tony, because it reminded of what we do sound-wise. We wanted a modern album like that, but not to lose sight of what made his records so brilliant in the past.” Adds Sensible with characteristic gusto, “His ’70s records compare so favourably up against all the maxxed-out ultracompressed autotuned guff that passes for records these days. We thought, ‘There’s a bloke who specialises in beautifully crafted old-school production – but how could we ever afford him?’ Then someone mentioned this newfangled route of a PledgeMusic campaign…’” To stump up cash for this exciting new phase, The Damned set up their first ever crowd-funding venture. All their graft on the road soon paid dividends, as their freshly galvanized global fanbase quickly coughed up a sum unimaginable to these lifelong DIY-ers. It turned out Visconti, now 73, had first heard of them from Bolan circa ’77, and was shocked they’d never approached him before. He duly signed up, without hearing a note of prospective music, as the band hadn’t actually finished writing any songs yet… with four songwriters on the team – on top of founder members Sensible and Vanian, their keyboard wiz Monty Oxy Moron (joined in ’96) and drummer Pinch (1999) both contribute compositionally – each set to work in isolation. As their sticksman resides in San Diego, there were no full-band run-throughs of the 20 tracks they penned until they convened with Visconti in October ’17 for Day One of an intensive nine-day session at Brooklyn’s Atomic Sound. Says Sensible, “The studio has a heap of wonderful-sounding antique valve gear and mics, and a lovely old Neve desk. Tony had us all playing live, bashing it out in the same room – the same way our debut album was made.”

Just before the sessions commenced, post-millennial bassist Stu West quit, making possible a short-term recall for Paul Gray, a Damned alumnus from the early-’80s purple patch that spawned the ‘Black Album’ and ‘Strawberries’. “Paul’s a spectacular bassist,” confirms the Captain. “He once told us that if he got paid by the notes he crams into a gig, he’d be a multi-millionaire.” Lifelong fans and newcomers alike will be blown away by the sheer breadth and quality of ‘Evil Spirits’: there’s hurtling Scott Walker-esque chamber pop (‘Standing On The Edge Of Tomorrow’), Farfisa-stabbing garage-psych (‘Devil In Disguise’), even the sweeping Broadway-isms of ‘Look Left’. There’s diversity, too, in the character of The Damned’s main players: Vanian, often cited as the very originator of goth, brings his brooding nocturnalist perspective to ‘Shadow Evocation’, while the madcap polemicist Sensible serves up unforgettable agit-pop aplenty. Crammed within ‘I Don’t Care’’s all-too-fleeting three minutes are a trio of distinct movements – one with Vanian musing amid piano and violins, and a second where his care-free feelings boil over into eruptive Who-esque rock, before we finally come to earth with a jazzy late-nite outro. It’s punk, Jim, but not as we’ve ever known it before. Also a Damned constant are the premier-league tunes: songs are filled to bursting point with melodies, with scarcely a second of airtime wasted. The Captain’s swingeing critique of Blairite imperialism, ‘We’re So Nice’, bounces along gloriously on a Tamla beat and is supremely catchy. “At the end of the day,” he observes, “it’s all about the tune, and making something fabulous that grabs the listener. The message is a bonus.The songs are mostly a reaction to the lunacy of today’s nonsensical politics. I started buying records in 1967, the Summer of Love. There were so many positive changes happening through the ’60s and ’70s – civil rights, feminism, the anti-nuclear demos. Whatever happened to all that? Where are today’s anti-war marches? Whatever happened to the beautiful hippy dream of worldwide peace and love?” Still a seat-of-the-pants DIY operation after all these years – it’s too late to stop now! – The Damned cut ‘Evil Spirits’ in nine days flat with Visconti – “a month’s worth of work in that short time,” shudders Sensible.

Thereafter, Visconti really came into his own at the mixing stage. Says Vanian, “We’re in an age where technology’s taken over, and there’s generally a blandness to the mixes of things. You go back to Tony’s mixes, and they’re way more complex. There’s a depth and subtlety to the mixes he did for us that we’re really happy with.” So, on every level, ‘Evil Spirits’ excels by the highest standards set by rock’s all-time greats. Armed with this late-career classic, The Damned can now look to the future, and rightfully claim the respect they’ve always deserved. “In the early days,” reflects an unapologetic Vanian, “so much of the focus was on our craziness as people, and not enough was said about the fabulous music we were creating. We were termed ‘punk’, but that became a niche, where it only did certain things. We always believed in it being more open-minded and variable, and that’s what we’ve tried to maintain over the years. “Our band has always predominantly gone forwards, and we think this album shows we’re a relevant band NOW, and what we’re capable of.” From The Damned, makers of some of the most exciting and influential music of the last fifty years, these are no idle claims. Here’s dreaming of a better world. Follow The Damned at: www.officialdamned.com, www.facebook.com/OfficialDamned twitter.com/@damnedtwits Youtube The Damned are: David Vanian - Vocals Captain Sensible - Guitar Monty Oxy Moron - Keyboard Pinch - Drums Paul Gray – Bass 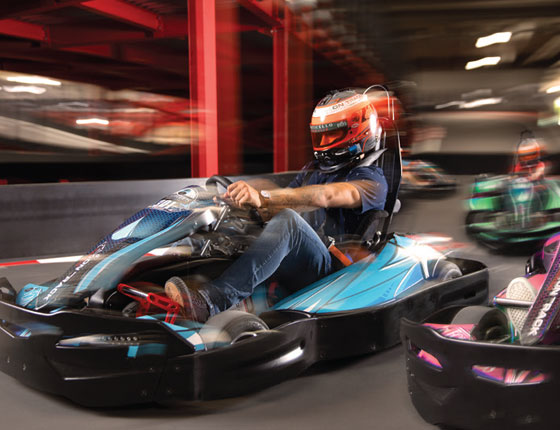 Put the pedal to the metal and experience the adrenaline-pumping thrill of racing at Foxwoods Resort Casino!